Hotspot Shield is an internet connection protector that encrypts all traffic which helps shield you from all types of spying even as your PC communicates with the World Wide Web. This utility is a must have for all those who use public networks of Wi-Fi.

But at the same time, it’s also an excellent program to ensure that you can connect to sites on any network connection as per your preference instead of somebody else’s.Hotspot Shield VPN (Virtual Private Network) is used by more than 10 million people which makes it the largest such network in the world.

Hotspot Shield is browser independent and creates an encrypted connection to its servers, and later turns all HTTP traffic to the more secure HTTPS. Basically, it re-directs the web traffic and provides you with a new IP which is hosted by AnchorFree, the makers of this software. By doing so, the company ensures your data isn’t accessed by wireless network spying or man-in-the-middle attacks.

In a few tests, it was seen that sometimes Hotspot Shield would load pages quicker than when not connecting through it. This is mostly due to the company server’s geographic location.

When tested on a notoriously intrusive public Wi-Fi network, Hotspot Shield Elite was pretty fast. Connection lags were nowhere to be seen inspite of rerouting. The program also handled remarkably well HD videos from video streaming sites like YouTube, Metacafe and Vimeo. This remarkable improvement in the speed alone is enough for its recommendation to readers, lest we forget its extra security benefits. 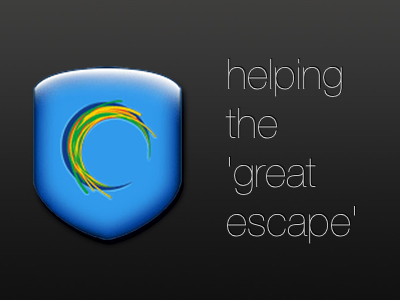 Hotspot Shield’s free version does have a small cost to pay though. Its installation gives you two toolbars, one of Hotspot Shield and the other from Conduit which reroutes your default homepage and search. Another irritant is that whenever Hotspot Shield is activated, it opens a new tab with AnchorFree’s website URL and automatically starts playing a video. This can get on your nerves after a while especially in a product that is so specialised and valuable. However, it must be mentioned that the reroutes and toolbars are optional.

After installation, Hotspot Shield can be seen as a red colored system tray icon that turns green once activated. It can be toggled on or off by right clicking this icon. Once you choose the properties option, a new tab will open that lets you know that your connection is active. By accessing the details link, you can know more about this connection including the data transfer figures, VPN IP address and connection duration. The data transfer rate is useful for people on data caps. There is also a paid version of this program known as Hotspot Shield Elite. Although it has no built-in features, there are reports of AnchorFree and Skype agreeing on collaboration wherein new Elite buyers will get two hours of free Skype talk time. AnchorFree has also created many ways to go around the download blockers in countries with tough censorship. Overall, it’s an excellent utility for all those using public Wi-Fi networks.