Potholes are awful, and they can really damage your car or just make your journey very uncomfortable. However, most people don’t think of contacting their local transportation department about fixing the pothole. But, Boston is now trying out an app called Street Bump that is helping the government discover potholes. In return, the users are able to get better streets. So, what do average drivers and users have to do in order to detect and report potholes? The truth is, very little. 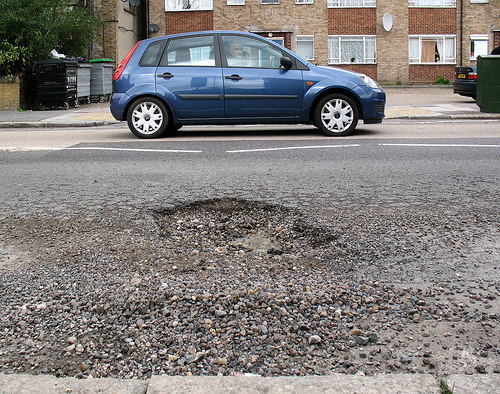 The Street Bump app is very easy to use, which is why it is so successful. Instead of expecting people to report potholes manually to their transportation department, which takes time and may feel awkward for some people, the app automatically transfers information to the transportation department. The information is then checked for accuracy, and the pothole is fixed. All users have to do is drive with the app on.

In mobile devices, there is something known as an accelerometer. This records vibrations, and it is most commonly used for gaming and other basic functions. However, Street Bump uses it for detecting vibrations that could be potholes. Anything that is possibly a pothole is directed to the transportation department.

After the data is received, the transportation department uses another program that references the area and checks for potholes. This is important, because a bump in the road can be caused from sticks, running over trash or toys and just bumpy or windy conditions. The program ensures that a repair crew is only sent out to real potholes. This makes sure that no time or money is wasted sending crews out all over the city.

While the app has a lot of promise, it has not been released yet for use. This is mostly because the app is very new, so it is still in the testing phase. However, since the results have been so favorable and helpful, it is expected to come out later in 2012. City inspectors are just making sure that the app is perfected, because they don’t want a citywide app to be used if it is faulty.

Can it Detect Potholes Early?

Perhaps the only problem with Street Bump is that it cannot detect potholes before they come up. While it can help alleviate potholes, because repair crews will be sent out ASAP to fix the area, it will not help you avoid any potholes before hitting them.

However, Street Bump is just one app in a series of other similar programs. According to the mayor, if this app works well, they are expecting to make other apps that are more preventative. After obtaining information from the entire city, it is expected that another app will be developed, using that information. This one will be able to give users real-time results about road conditions.

There are a few challenges with finalizing Street Bump, but the city is doing its best to fix them to get the app out there. The biggest functional problem is that a lot of power is needed to run the app, which might keep people from using it. Some also worry about privacy issues, because this could be used to track people since it delivers GPS information. However, the app is designed so it doesn’t track phone numbers, so it is still private.

Potholes are banes that nobody likes, and Street Bump has the potential to help cities put an end to them forever. While there are some problems to stamp out, it is expected that this app will be available very soon.