Today, Google is celebrating Earth Day 2012 with a special Doodle on its homepage. Earth day is a day early each year where events are held worldwide to increase awareness and appreciation of the Earth’s environment. Earth day is celebrated almost just about every country on the globe. Earth day was first started on 1969.

Today Search Engine Giant, Google has replaced its logo with a time-lapse animation of blooming flowers to celebrate Earth Day, a worldwide series of events held annually to raise ecological awareness. We can see purple, red and yellow flowers sprout from a series of shrubs laid out to spell Google. 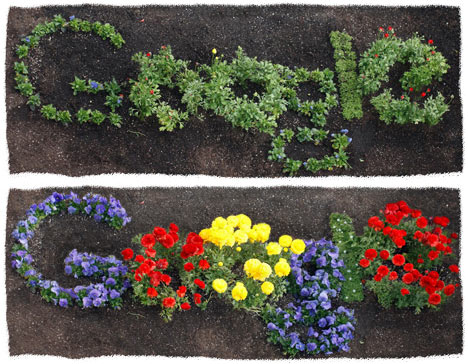 In 1970, Earth day was started in U.S. Just before 42 years. Earth day is effort to spread awareness about earth and environment. A year ago, 175 countries celebrated this day to save earth’s environment.

Groups that had been fighting against oil spills, polluting factories and power plants, raw sewage, toxic dumps, pesticides, freeways, the loss of wilderness, and the extinction of wildlife suddenly realized they shared common values.

This year’s Earth Day is centered around a scheme called “one billion acts of green”, which encourages individuals to make simple environmentally aware pledges, such as switching off light bulbs or reducing car journeys. Organizers say the day is now noticed in 192 countries.