Apple iPhones, iPads and Samsung’s Galaxy Smartphones and Tabs are the most attractive concepts of the modern world. People are crazy about these handsets and both Apple and Samsung are strongly competing with each other. Samsung Galaxy Smartphones and Tabs are making their valuable place in the market but Apple has a strong share in the market but at the same time we cannot deny the value of Samsung phones. 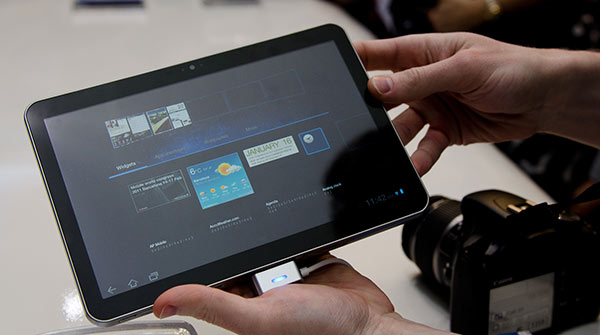 An incident also occurred recently in Dublin when the Galaxy S III Smartphone caught fire but these types of incidents may happen sometimes with any phone due to some extraordinary hot conditions.

The recent news is that the Samsung Galaxy Tab 10.1 got banned in the United States. District Judge of California said that Apple had made a very strong case against Samsung Company for copying the design patterns of iPhones and iPads. The design of Samsung Galaxy Tab 10.1 is similar to Apple’s iPads, said by Apple. The designs of iPhones and iPads are the creative property of Apple and no one is allowed to copy the designs of Apple. There are approximate 30 legal cases between the two companies over design copying in 10 countries.

Apple is the leader of the market, despite that Samsung sold a range of sets in the U.S. market. Apple and Samsung are engaged in the legal battles since April 2011 when the Apple Company appealed against Samsung. Apple has won same rulings in other territories like Germany and Australia in which Apple forced Samsung to change the design of its products.  The court said that Samsung also could not import the device or any product which is just different in terms of color into the country.

This is very disappointing for Samsung and it will affect the people of U.S. not having phones of latest technology. Samsung said, we will appeal against this case in order to continue pleasing our customers all around the world. Other Galaxy tabs will continue to be accessible, said by Samsung.  Lee Seung-woo, is an analyst said that Galaxy Tabs are not the key product of Samsung, so it will not make any difference and also will not affect the Samsung’s earnings.

It is very necessary to note that this will affect only Samsung’s Galaxy Tab 10.1, not the new updated version Tab 10.2. With reference of an IDC report from March 2012 Apple’s iPads had captured 54.7% market share in 2011 where as Samsung had captured only 5.8 % market share.

So, what will be the outcome of this case? The Samsung Galaxy tab lovers are waiting for.