If you are sick of the iPhone and iPad standard browser you might want to look in this direction as we will be telling you about other options and the great Google Chrome browser for iOS.

The iOS was fairly limited over the last few years when it came to mobile browsers and Apple held a firm grip on the market with their own, integrated, browser. However as of late June 2012, Google got in on the act and launched their Chrome browser for iOS.

This was just another step on the way to create a full on technological war between Google and Apple as the company also announced their own tablet which will be seen as a direct competitor to the iPad. The Chrome browser would have larger implications than many people might think as it will provide Google with an entirely new source of revenue. It was revealed that Google and Apple will share some of the advertising revenue in exchange for Apple implementing the Google search feature into their own native browser, Safari. A successful launch and good reviews of the Chrome browser could potentially lure a few customers from iOS over to Android as Google make their mark on the mobile world.

Last month Yahoo tried to do something similar but the brand has lost a lot of pull, especially outside of North America, and the launch of its own iOS browser, Axis, went fairly unnoticed. However, the Chrome name is already very well-known around technology circles as it has been a solid web browser on computers and PC’s over the last few years. This could potentially boost the number of downloads, especially if some sort of integration or data transfer between the PC version and iOS version is possible.

As for the actual iOS Chrome browser there are a few interesting features to be considered. The tabs look a lot like the PC version with a lean and sleek design. It will also be interesting to see how many of Google’s other features such as Google Maps and Gmail work in the browser as this could attract even more users to opt for Chrome rather than sticking with Safari. 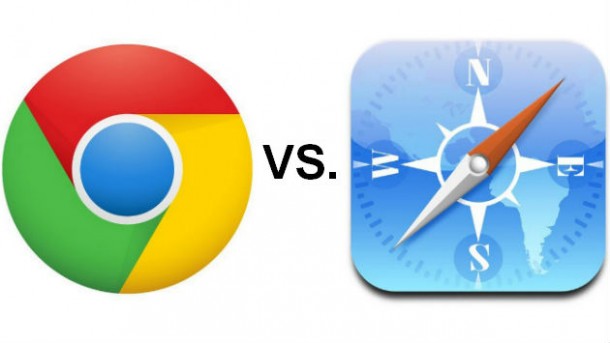 The best thing about the newly released Chrome browser is the price. In other words, it’s free. Even though most other browsers come at no cost as well, this one gives you a great browsing experience without compromising any of the features that you want in your iOS browser.

If you are looking for another alternative and you want to break out of the old-fashioned, commercialised browsers offered by Google and Apple you might want to have a look at Dolphin. This free browser app is seen as one of the top browsers for iOS and in many ways it outperforms the Safari browser by miles.

It not only offers download management, but also a nice crash recovery feature which is usually just found on PC browsers. Overall it is a bit faster and a bit sleeker than Safari but it has not been measured up against the Chrome browser just yet. If you’ve done a lot of browsing on your Safari browser you might be deterred from changing as there is no built in way to move over tabs or favourites.

This means you have to enter addresses manually and this is a major strike against this alternative. It is not a native iPad or iPhone app so some features will not run as smoothly as the Safari browser but overall it is a viable option for anyone looking to get away from the same browser as everyone else uses.