Here is the head to head comparison between Samsung Galaxy Note 2 VS iPhone 5. Apple and Samsung have both announced their newest smartphone product. Samsung has the Galaxy Note 2 and Apple has the iPhone 5. Both smartphones will surely become highly in demand in the market. 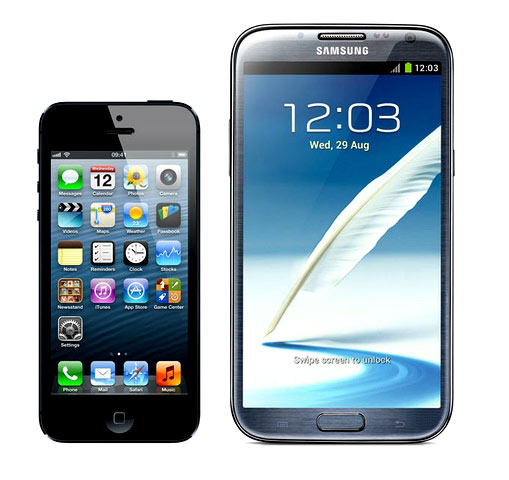 Here’s a face-to-face comparisons of the Samsung Galaxy Note 2 VS iPhone 5.

We all know that iPhone 5 was recently announced to the public and clearly, it has big improvements compared to iPhone 4S. The new iphone showcases a 4-inch screen along with better A6 chip. On the other hand, the all new Galaxy Note 2 proudly displays a 5.5 screen. Furthermore, it has 1.6 GHz quad core CPU. Its CPU consists of Exynos 4412 quad chipset. When it comes to appearance and size, iphone 5 now has slimmer body which is only 7.6 mm. It is about 58.6mm wide. Moreover, it only weighs about 112 g. In contrast, Galaxy Note 2 aimed for bigger screen. Nonetheless, it has better pixels which are 1280 x 720 in 267 ppi. On the other hand, iPhone 5 showcases 1136 x 640 pixels in 326 ppi. The new Note has HD Super AMOLED Plus while iphone has retina display with IPS LCD.

Apparently, these new smartphones both display an 8 megapixels camera on rear. The Note 2 and iPhone 5 has 3264 x 2448 pixels. Both have impressive autofocus as well. However, they differ when it comes to the front camera because the Note has better megapixels, 1.9. iPhone 5’s front camera is only 1.2 megapixels.

The Note 2 proudly holds 3,100mah battery. This makes it a leading smartphone in terms of battery life. Then again, iPhone 5 gives you 8 long hours of talk time if you are on 3G.

Samsung is very proud of its NFC technology which the new Note 2 has, as well as the Galaxy S3. Nonetheless, iphone 5 and Note 2 both have Bluetooth features, wifi and 4G LTE.

So which phone in Samsung Galaxy Note 2 VS iPhone 5 you think is the best smartphone? Share with us via comments below.