Many times, when people are selecting a laptop or a desktop, they do it on the basis of the Operating System that comes with it. Choosing the right kind of operating system is very important, as it sets the base and pace for the system performance, and also lets one know the kind of software that can run on it. 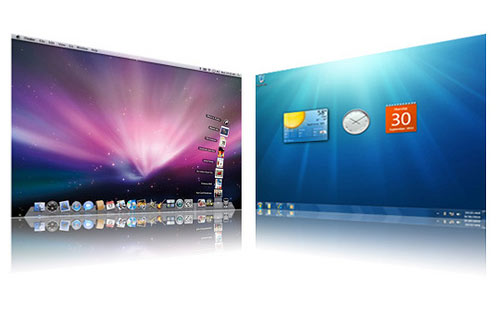 Usually, the battle is between Mac and Windows, as both are known to be superior in terms of performance, and give different kinds of benefits to users. However, at the end of the day, it is the utility, and the requirements of the user that play a major role in deciding which Operating System to go in for.

Here’s a brief look at Windows 7 Ultimate and Mac OS X Snow Leopard to see which one’s better for whom.

The good thing about this OS in terms of software is that it installs applications in a smooth fashion, with a unique ‘drag and drop’ feature, which makes it easy for a user to relocate the files as and when required. The .dmg installation files are basically temporary extensions, which get deleted / ejected upon the successful installation of new software.  Simultaneous software can run pretty smoothly, without causing any problem, and setting of the System Preferences too is an easy task, considering the panel is neatly designed for convenient changes and modifications.

Another notable feature on Mac is that it gives Internet browsing experience via Safari as the default browser, which is excellent in terms of interface, and offers good facilities for bookmarks. Windows has always been known for creating a user-friendly interface, with a neat and convenient way of functioning. In terms of software installation, it has a certain installation wizard of its own, which runs the .exe files to install new applications. There are certain glitches in terms of running too many software simultaneously, and locating of the setup files is a bit of a task for relocation.

For web browsing, Windows offers Internet Explorer as the default browser, which has always been considered to be slower, when compared with other kinds of browsers.

When looking at software installation and running, Mac most definitely wins, as it offers a smoother experience to the user. With Mac, the user actually knows what he/she is doing, unlike Windows where one might just be clueless.

In web browsing, again Mac wins with its browser. When comparing software, however, it is important to note that while Apple does have some award winning software on its desktops and laptops, there are a lot of important software for which Mac versions have not been launched, and thus, they run on Windows only. So the user needs to see what software he/she will need, based on which the OS can be decided.

Graphics and resolution of Mac has always surpassed that of Windows, but another important factor to note is the price, which is more case of Mac. Not everyone can afford Macs, but at the end of the day, they do compensate with amazing features and service.